It’s that time of the year again! You’ll see costumes or silly masks on campus; everything today will be creepier than normal and so on. I see that the weather is also a plus. Yup, it definitely looks creepy.

You know what also looks like creepy? Campus. Have you noticed that some of the places might make you cringe or get you shaking with either adrenaline or panic? For me, it’s not only one, but many… And there are many factors as to why they’re creepy. Either they have a ghost story or are just plain weird to me. Here’s my list, and I bet you can identify with these if you know which ones I’m talking about!

The basement and building itself are a maze. I still can’t figure out my way through it and that scares me, haha! Also, the poor lighting doesn’t help. Good thing there are signs pretty much all over. Gotta love my class at 5pm in there…

At first I thought you could not get in there at all. It looks like an abandoned building, and I had never seen anyone leave the building until I had to go in there myself. Once you get in, the hallways and pretty much everything are very narrow. Guess what? It’s believed to be haunted too. Typical haunted building!

The entrance of Lagomarcino Hall

At night that thing looks like the path to a whole new universe–not a pretty one though. That little green area in the middle is dark, and I can hear all sorts of animals over there too! Alice from Alice in Wonderland would for sure like that place…

THAT tunnel on the way to Frederiksen Court

That one by the barn…you know what I’m talking about, right? “It’s just a tunnel, why is it creepy?” Well…let’s just say it’s dark, the light flickers, and there is an echo–in which you can clearly hear others behind you. And…when the train comes you might feel vibrations and it sounds like a “howl of pain.” I feel like I’m in a horror movie the five seconds that it takes me to go through there. Every single time. 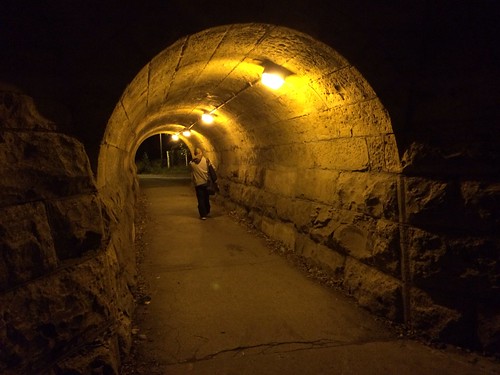 A little example of what I have to go through every day, haha!

I’ve had two night exams there and it’s been a nightmare trying to find the rooms–alone. One of those times I had someone follow me up the stairs and he turned whenever I turned–he turned out to be from the same class–but wow, I got scared. Like Gilman, that place is a labyrinth but with more open space and hallways. Also, there are not many lights on by that time! Clearly put me off my game for my math tests…

I can’t count how many times I’ve had to walk that path at night. Maybe it’s that hill on the side or the trees make everything creepier and darker…but I dread every time I choose to go in there. Why don’t I go the other way? It takes too long, haha!

Yeah, that little museum by Ross Hall and Food Science. I bet you’ve already heard of this one by now. From the lights going on and off; to curtains opening; to furniture, plates, and other things moving…Farm House is the typical haunted house. The only time I’ve been there has been on the “Haunted Iowa State” tour. Not only does Farm House preserve the older layout of houses from the 1800s, but you can feel the presence of one or several entities–just like the people who once lived there are still there (and maybe they are)…

I mean, the residents host a Haunted House every year and there is a reason… Do you think there’s something in there? I’ve heard there is. From footsteps, noises, and people staring out the window. Definitely not my top place to go for a visit.

Do not bring mirrors with you to the second floor of Linden Hall. That is my advice. Take it, I’ve, like the weird person that I am, tried and I’m forever scared to go there, haha!

I’ve also head of Barton, Oak-Elm and others to be haunted as well. LESSON: Let’s say that Old Richardson Court is a creepy place in general.

Let me be straight with you and tell you that this place has its own ghost, Fredricka Shattuck. She’s believed to be harmless, but it’s a ghost nonetheless. There’s also someone in the basement tunnel between Fisher and Stephens Auditorium, C.Y. Stephens. It is also believed to be good luck if you see him watching a performance…isn’t that lovely?

For the people that take Psychology 101 like me…you’ll have to go through a lot of basements to find these studies and offices for your research points. Well, this building particularly got me. I kept looking and looking for where to go, and between all of the narrow hallways and tunnels to other buildings…I got lost.

Yes, that one place we go every day to eat, meet friends, or buy books. It might not seem creepy to you because it’s such a central, populated place. I thought so too, until I started hearing weird eerie moans in the Gold Star Hall. Did you know there is only one woman among all of the names mentioned in that hall? The only female to graduate from ISU and die in World War I. She’s believed to be the one causing the noises.

As if a cemetery couldn’t get any creepier. Well, there are many, many stories from that place…creepy ones I may add. For instance, a mother that will forever remain looking for her child. Yeah, that one and countless others. You’d better to not to mess with that place…

Not to freak you out or anything, but Friley definitely has something in its basement. I went there only once, but I’ve heard countless stories from my friends. Some of the doors are locked and the environment was just something I didn’t find appealing. Ghosts, weird activity, and such… Friley residents, I bet you know something about this.

Have you ever heard the words: “Helser looks like a creepy hotel”? Well, I’m telling you right now, because it kind of does. I’m sure residents can tell you countless things that have happened…but one of my roommates from last year personally has heard noises come out of the basement. Could it be haunted? Do you know? Creepy hotel…

Another lesson: Residence halls pretty much have some of the creepiest background stories.

So, do you identify with these? What are some places out of this list that you consider creepy? A place doesn’t really has to have a ghost story to give you goosebumps, but it helps, haha! My personal experiences have made me scared of almost every place on campus at night…so that’s just great! It’s safe to say that if a raccoon, squirrel, or bunny passes through those places…I’ll for sure jump and run for my life.

Happy Halloween everyone! Can’t wait to see your lovely costumes!

One response to “Creepiest Places at Iowa State”