The secret is out. For the past year, I have been the social media intern for Iowa State Athletics. 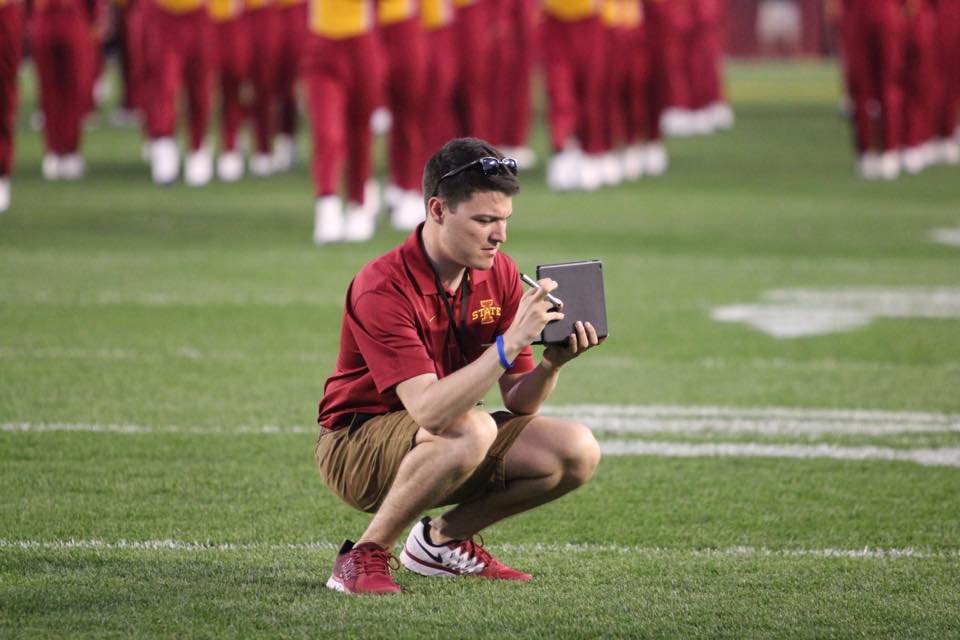 It’s been a crazy year, with courtside and sideline passes to every game and working hand-in-hand with ISU Athletic Marketing Associate Becca McLaughlin, aka my boss and social media mentor. Below you can find my thoughts on all six platforms I had a chance to be apart of for the 2014-2015 sports calendar to help bring all the action to #cyclONEnation all across the U.S.

It’s been really fun for the last month or two finding out that there are Cyclones all over the nation! We have Cyclones everywhere and it’s been a blast having a front row seat to their living rooms. 🙂 Check out this photo album to see over 200 snaps people sent me. We’ve done a lot of contests over the year, but my favorite has to be the having people dress themselves up as Cy. It was great to see how artistic people can be on such a small screen.

We taken a new approach to our tweeting this year, and it’s been pretty hilarious if I say so myself. We’ve added GIFs and my huge library (see every blog I have ever written) has helped me find some pretty good ones during games.

MORRIS TO MCKAY ALLEY-OOP!!!! SO PRETTY!

Here’s a perfect example of my boss live-tweeting during the game. We like to add emojis, scores, times, and anything else we think fans need to know. We did this for both away and home games this year due to the sold out season at home. Our fans are crazy on Twitter, so it’s really interesting to watch live.

Iowa State Cyclone fans love these, which I think shows just how loyal our fans are at this school. Graphics with scores on them also go bonkers, especially after big wins like Kansas and Iowa.

One of my favorite things to do is find photos of fans’ Instagram accounts and then repost them. You can find all kinds of fans with the hashtag #cyclONEnation and #LoyalForeverTrue. This is one of my favorites from the last game, especially because it has Georges in it.

Thanks to Apple’s hand-dandy slow-mo feature it was very easy for me to capture some pretty interesting videos during the games. Including dunks like this one in slloooowwww-mmmooooo.

One of my favorite Vines to make was a flipbook-like video for ESPN’s College Gameday. It starts with me showing off the new shirts and all the fat heads the team made for the huge event. Click here to view.

If you check out our Facebook, you will see we like to share articles written about our teams and student-athletes. Some of the best include an inside look into Georges and Naz’s apartment and Edozie’s life story by USAToday. You can find them both here.

This is something I never thought would be huge on our Facebook, but it turned out I was wrong. People love wide shots of our facilities, including panoramas like this one. People would like and share photos like this one almost to an out-of-control level. Who knew! But then again, I really do love this picture. This has been one of my favorite little projects we came up with, and I love the little sayings on the cards I came up with. People loved them too, it helped us move up to the second most followed Pinterest account in the NCAA. View them all here. Another one my assignments on Pinterest was going through all our photos from different games and upload on to our page. Our photographers are amazing and the guys look pretty sweet. Check out all the photos here. Trust me, you won’t be disappointed.

One response to “Confession: I’m the “Snapchat Guy” for Iowa State Athletics”