After living in seven different places over these past four years, I’m rounding out my college career with two people – Liz and Stephanie (or “Steph,” “Phan,” “Phannie,” or “Frannie”) – I met sophomore year. The three of us love walking to class, grocery shopping, decorating our walls, attending events on campus, and foraging great memories and tweeting along the way. These are the tales of 410 Spruce.

Liz, Steph, and I find ourselves funny and while we like to think others do as well, we know sometimes that’s more of a fantasy than a reality. However, just over a week ago we were granted to opportunity to share our voices – and personal humor – with a live audience as hosts of the 2017 Varieties Finals. Varieties is an 86-year-old Iowa State tradition where teams perform student-created mini-musicals set to the beats of popular songs with individual performances – magicians, musicians – in between. This year’s theme was #ReliveTheLegends and thus the organizers needed some legendary emcees. So, when Thursday evening rolled around – the evening prior to the event – and the organizers found that these scheduled emcees were unable to host, they realized they’d have to call-in back-up. Remembering I acted as an emcee for Dance Marathon, they reached out via email. I dropped the proposal on my roommates and Friday evening we scampered over the Memorial Union, ready to take the stage. By “ready,” I mean, eager and excited to assume the microphone. However, we didn’t have anything prepared. Giddily, we jumped around backstage, trying to figure out merely how to start the show. Once we threw an opening act together – a classic “I’m the only host, does anyone else want to come up?” followed by the other two emcees joining the first on stage – we quickly became comfortable with the spotlight. So much so, by the end of the night, we debuted an original song of our own. 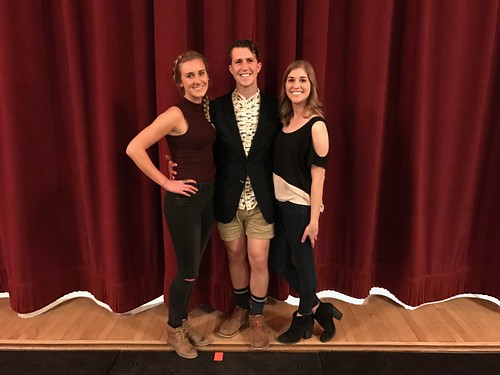