So, first things first! Before you get carried away stressing over that calc final, organize yourself. Look at your calendar, verify which exam comes first, which one is harder, and plan accordingly. Ideally, you’ll start with the one that’s harder, but also, obviously the one that comes first. If you have an easy one on Monday, just study for that one first, get it out of the way before tackling your second one. However, don’t forget to…

You may really want to focus on that chemistry exam ‘cuz you know it’s going to be much harder than the music final. However, if you focus all your time entirely on the chemistry final, then all your other classes will suffer! Try to pace yourself so that you have enough time to tackle all subjects.This is also better for your concentration. If you try to focus on one thing for extended periods of time, your concentration will eventually wane and your time won’t be as productive!

It matters a lot where you decide to study. Creating the perfect study ambiance is key to getting a lot done is shorter amounts of time. For example, I’m not a library person; if I tried to study in the library I would be looking at Pinterest and watching YouTube videos most of the time. I need somewhere like a coffee shop, my room, or even the Sun Room in the Memorial Union. I think the common theme is somewhere that exudes a relaxed study vibe. Which is that environment for you?

As I mentioned above, your concentration span has a limit, and you should try your best to identify yours. In psychology, it is said that the standard is something like 17 minutes, and after that time you should do a little something else to break time up, and then resume your studying. For example, when I’m at home, I’ll take a break to grab a bowl of cereal, or take a shower, or watch one YouTube music video, or something similar to that. Alternately, if you do study non-stop for longer periods of time, take the break to go to the gym and de-stress, or grab a cup of coffee with a friend.

Very, very important! Are you a loner, or do you tend to study with people? I’m definitely the “loner-study-type”, and while I’ve given the whole “study group” thing a shot before, sometime I’m stuck with other people who are taking different classes and we all just end up interrupting and distracting each other all the time. The important thing here is to study with someone who is taking your exact same exam, so you can truthfully help each other out. If not, then what’s the point?

This is something most of us just send to the back-burner during dead-week and finals week; and something we shouldn’t! Sleep is very important to consolidate memories, and recall things better. Ever noticed that you recall things that you studied the day before the exam better than the things you tried to study the morning of? Is because your brain had more time to encode those thoughts and memories from the previous night than those from that morning.

As soon as your accomplish one goal that you set for yourself during the day, like finally finishing that final paper, do something you want to do! For example, finally shower…haha, watch that episode of House of Cards, go for a run, or just take a dang break!

8. Know when you’re the most productive.

Study in your prime time. This is pretty different for everyone. For example, for me, the mornings are completely futile. If I tried to study in the morning, I’ll be wasting my time most of the day. I don’t know why, I just can’t concentrate as well! Prime time for me is during the night, from 6pm onwards. If you know you have to be getting things done the whole day, then try to divide subjects up by the times you are most productive. For example, I like to tackle the lighter things during the day, and leave the heavier subjects for the night when I’m more concentrated.

Trust me, you’ll be regretting the boxes of pizza you’re ordering at the end of the night when, not only are you not feeling that confident over the exam tomorrow, but you’re also feeling “bleh” ‘cuz you just ate like five slices of pizza. This is not the time to forget about staying healthy and munching on foods that are good for you and improve your concentration. At the end of the day, you’ll feel like you are keeping things together.

If you must get off Facebook for the week, then do it. If you decide that Instagram is making you lose precious minutes of your day, then implement specific times you’ll be checking on your social media platforms during the day, rather than letting the little notification ringtone interrupt your one-on-one date with the periodic table. Get in control!

I hope this helps you guys be a lot more productive during this awesome finals week that is around the corner. In the meantime, though… 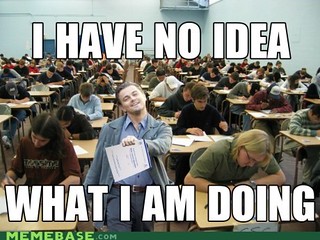